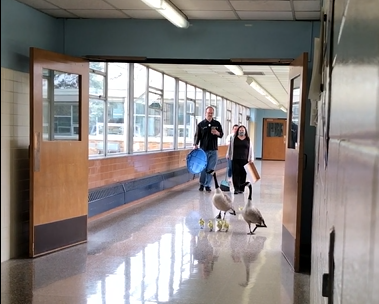 Never in a million years did students expect Geese to enter Guilford….

During the teacher institute day on Friday, April 29, the geese waddled into the building. GHS staff members first guided a family of geese out of the northeast courtyard, and then another family out of the southwest courtyard: a mother goose, a father goose, and goslings out of their home, through the hallway, and out the front door.

Guilford teachers remove the geese annually in order to keep them safe. Baby geese are easy victims of winged predators around the school.

Other staff members also contributed to the goose relocation, including Mrs. Amy Lowery, English teacher, and Mrs. Chris Magee, college and career academy coach. Staff lined the routes that the geese could have potentially escaped through with tables.

“We decided to schedule it on Friday because no students were here,” said Mr. Primrose. “We have thought that we’d need to wait until the babies are older. So we usually wait until they are five or six weeks old. But the problem with that is that when we wait that long, many if not all of them are killed by hawks or owls.”

Many teachers that have classrooms by the courtyard have unfortunately seen the bodies of goslings who were victims to hawks and owls.

“When I saw the nest on the camera and did some reading, what I saw was that they’re good to go within a day or two,” said Mr. Primrose. “There’s no sense to leave them in the courtyard just to get picked off by the hawks.”

Baby geese cannot fly for several months after birth, so waiting too long to remove them can be fatal to the goslings.

“Sometimes we get them out and sometimes we don’t,” said Mr. Primrose. “Like last year there were none left because they all got eaten.”

But what happens when the geese make it to the front of the school?

“…They have a far better chance of survival than they do here,” said Mr. Primrose. “They can’t go anywhere because they can’t fly for several months…Some people might say, ‘Well they were safe in here.’ Not really. They’re safer out there than they are in here.”

Leading out of the school is just one of the ways that our staff can handle the goslings.

“There are two options: We can either take their nests apart while they’re building them, which is one way we’ve learned that you can keep them out. Or you could scuttle the eggs by breaking them or pouring oil on them which will stop them from being able to incubate and hatch,” Mr. Primrose continued. “But we’re all animal lovers so we’d rather go the route of letting them have their babies…and getting them out.”

Geese get anxious inside the school and look for places to run so it is crucial that the staff block off the hallways and get them out fast.

“We take tables out of the teachers’ lounge to block it off up here so they can’t go east or west,” said Mr. Primrose. “So we have two choices. We can either prop the teachers’ lounge door open and get them to try to go through there and out, but we didn’t think that would really work. Mr. Carlson and Mrs. Renaldo went out and got the geese to walk over… It took Mr. Carlson about 5 to 10 minutes to get them to walk out.”

“…once they’re in the hallway then Mrs. Renaldo and Mr. Carlson come in and slowly walk behind them and they walk down the hallway…and out they go.”

The Geese’s first steps on the front of the school aren’t always easy though. Other geese have the tendency to get territorial and claim the land as their own.

“There were four other geese out there that seemed to want to come after them,” said Mr. Primrose. “So I went out there and I stood between the ones we got out and the other ones that tried to get to them. I ended up walking them around the side of the building, through the teachers lot and back out to the back.” (One of the aggressive geese) flew over my head and I tried to swat at it, but I missed it. It landed right by the mom and then the mom attacked it. She was biting down on its neck and I went over there and shooed it away too…I walked them out into the baseball field and off they went.”