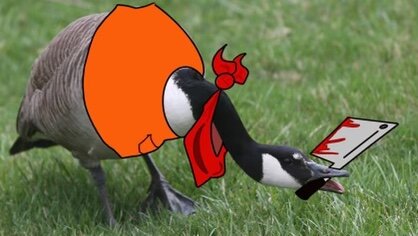 After charging its unsuspecting victim, a killer goose prepares to bury the evidence. (Photo illustration)

Canadian geese have been dominating the Guilford High School campus for years, this year making a reappearance in February. They stalk student activity by gazing in through the windows; interfering with traffic; and captivating students in the process.

Just a few weeks ago, Mr. Daniel Bingley’s second hour newspaper class gawked at the geese in the courtyard for a solid 20 minutes before starting their work.

Despite Mr. Bingley turning on the news, the class could not take their eyes off of a goose who was about to jump off of the roof. After it flapped off, it began threatening another goose on the ground, and the newspaper class became even more captivated.

They go beyond nesting in the courtyard and actively interfere with student life and nearby traffic.

“Geese are wild. I was going to dinner and one was standing in the middle of the road and wouldn’t move. Even after honking, I had to go around it,” said alumni Kenzie Jenkins.

Although geese seem small given that they weigh 5-14 pounds, it seems shocking that they could halt traffic in the middle of the street but geese are truly a powerful force of nature.

Geese, however, go beyond halting traffic geese actively stealing sustenance from Guilford students. The first and only known victim of goose robbery this year was a freshman.

“They used to let us outside for lunch,” said a senior who requested anonymity. “The second week that they allowed it, a goose snatched a kid’s sandwich, ran, and flew off. The kid didn’t even know until 2 minutes later. He was just really confused.”

Geese off campus have even gone as far as attacking students. Sophomore Josh Zills stood strong despite being confronted by a vicious goose.   “I was walking at the Mercy Health Cancer Center and a goose ran up to me as I was minding my own business,” said Zills. “He ran up to me as if he were trying out for the sprinting Olympics and was honking, flapping his wings at me. In my head, I remembered that the way to neutralize a goose is to lightly grab its neck and move it to the side. So I did exactly that. He walked away right after.”

Geese’s necks are packed with sturdy muscles because the geese use their necks for support in combat.  Because of this, picking up a goose by the neck without squeezing does not hurt them but merely stuns them. Grabbing a goose by the neck and lightly tossing it to the side is one of the best ways to avoid an attack.

“Over near the cafeteria lines in the hall, there’s a goose with a nest of eggs and one day it was just standing in front of the window looking at me as I was walking down the hallway,” said Kara Kahle, sophomore. “It was just creepy.”

They are often aggressive towards people because they are protective of their nests. Their aggression makes students cower in fear, scared to find out who the next victim is.

“I was walking from my car to the building early in the morning,” said the previously mentioned anonymous senior. “The victim was from the women’s swim team. She was getting dropped off by a parent so she was coming through from the other side and she didn’t see it from my angle. I told my friend, who was walking with me, that the bird was gonna poop, it almost hit her because she walked pretty fast. So it hit the ground just missing her, and the person behind her stepped back.”

The geese seemingly stalk the students by instinct, leaving students watchful of their surroundings.

“When I drove by one day, there were like six lined up on the roof. I swear, I thought they were plotting something,” said Jenkins.