When is violence the answer? 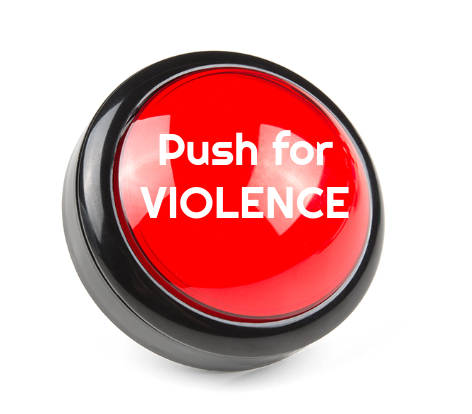 As high school students, we are often told not to escalate situations to the point of violence. The guidelines for what actions lead to suspension, and which lead to expulsion, are generalized to students at the beginning of every school year, and reminders are sent out at different times reminding students to “keep the peace,” and avoid giving in to their emotions. Despite these messages, there are constant fights both on and off of school property. While there are consequences for students who engage in such behaviors, the lines of who is in the right and who is in the wrong are not always clear, or consistent. Students who are provoked by the actions of others may not be considered responsible for a fight, even if they throw the first punch. Though the administration has a system in place to dissuade students from fighting each other, there are some situations that seem to warrant a punch. This begs the question, when is violence the answer?

Perhaps the “right” answer is that violence is never the answer; However, if that were the correct answer, then there would be no wars, fights, or altercations. Though it is true that most situations should not be “repaired” with violence, there are certain situations when patience is stretched too thin, peace talks have been made (and ignored) too many times, and the only solution is to maintain your pride and refuse to go down without a fight. These situations always have consequences, from a personal level, through guilty feelings or punishments, to an international level, with massive amounts of war debt, and injured economies.

Perhaps there is some indicator that will always determine when violence will occur. Some way to consistently measure the breaking point of a person or country. From my own perspective, the general cause of aggression is personal attacks on the people that are loved most. Insults or jokes towards family members, living or deceased, can set off a violent reaction instantly, and the death of innocent civilians is enough to push a country to deploy its armed forces. Pride also contributes to people’s willingness to fight each other, but it seems to do so on a lesser level than attacks on loved ones. While physical confrontation is deemed socially unacceptable, there seems to be an understanding for those who respond physically when provoked by words that attack their loved ones. In a similar manner, when the citizens of a country are attacked by a foreign country, the citizens are far more likely to support a military response. Does this mean that national or international violence is justified? No, it does not. However, by putting a deeply personal reason behind the violence, it is able to garner enough support that it can be carried out without very much push back.

Despite there being support for “patriotic,” and “loyal” violence, there is plenty of dislike for other types of violence. Violence without clear reason is despised, especially in a situation in which the victim of the violence is an “innocent bystander.” People who are injured or killed during altercations that do not involve them being aggressive, such as robberies, mass shootings, bombings, or random unprovoked attacks, are often viewed heroically. Meanwhile, their attacker is viewed horrendously. Unprovoked violence is not supported by the general public, and if an event is prominent enough, it can lead to further, provoked violence. Of course, unprovoked violence often seems illogical, which it is, which makes it far more difficult to understand and accept as a society, but that doesn’t mean that the only kind of violence that is frowned upon is unprovoked. Violence that stems from people wishing to “protect” their pride or reputation is often frowned upon as well. The idea that a person, or a country, has assaulted another person or country, simply because they were offended by a personal attack, is not often seen as heroic. This kind of violence seems selfish, careless, and unhelpful as it only escalates situations that could have been solved with a brief exchange of words. This is not to say that you should allow people to demolish your sense of honor, but it is to say that a physical response is far from the best response to people’s passive aggression. It also seems to be that those who try to save their dignity through fighting are not truly proud of what they are fighting for. Physically fighting for one’s pride does not necessarily mean that someone is standing up for themselves, it seems to really be a reflection of which egotistical aspects are suffering in their lives. Issues that can be resolved with words, or avoided entirely are not acceptable forms of violence, and though they will likely continue to occur forever, they are not the right solutions to any of the issues in the world. They only make situations exponentially worse.