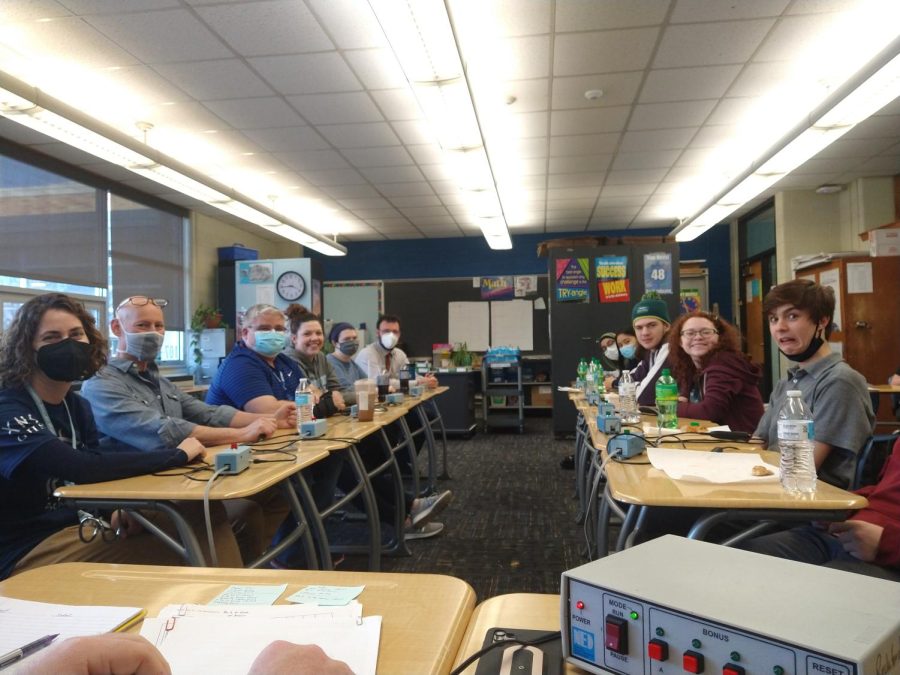 The scholastic bowl team prepares to compete against the staff.

On Wednesday, March 9, the Scholastic Bowl team got together to face off against some of the hardest competition yet: the staff. After a long season of weekly matches and weekend tournaments, the season was finally coming to a close.

“My favorite part of the season was the Staff vs. Student game at the end,” said Mr. Lynch, Scholastic Bowl coach. “During the season, I like when we do unexpectedly well – even if we don’t win, and I like getting to know the students who are on the team better.”

For the past eight years while Mr. Lynch has been the scholastic bowl coach, the season has always closed out with the Staff vs. Students match. Any staff member can join the fun, and pizza and soda are also served.

“It was great to work with the whole team at once, which is something we don’t get to do in normal matches,” said Katie Dao, sophomore. “It also had a lot of unique questions that aren’t in normal matches either, and it was a really fun way to end the season.”

Many teachers have participated before, but Mrs. Wedwick, Mr. Bingley, Ms. Ries, and Ms. Bowers played for the first time this year.

“It sounded like a fun way to participate that gets me out of my comfort zone,” said Ms. Bowers, Career Awareness teacher. “I was a mathlete, so I’m reliving my mathlete glory days.”

This year, the team was made up primarily of new players, and the only returner was Jacey Jerding, senior. Despite most players being new, the team learned fast and grew both as teammates and as students, with the knowledge that they had learned.

“I think it’s helped me to develop my teamwork skills, working on a team, and working with people’s strengths and flaws and accepting them as they are,” said Rawan Quraishi. “Not only that, but it’s helped me brush up on things I’ve learned in the past at school as well as expanding my knowledge of other subjects I’d usually have no interest in, such as art history.”