Untold and unknown: Biden’s first year in office and the future of Guilford students 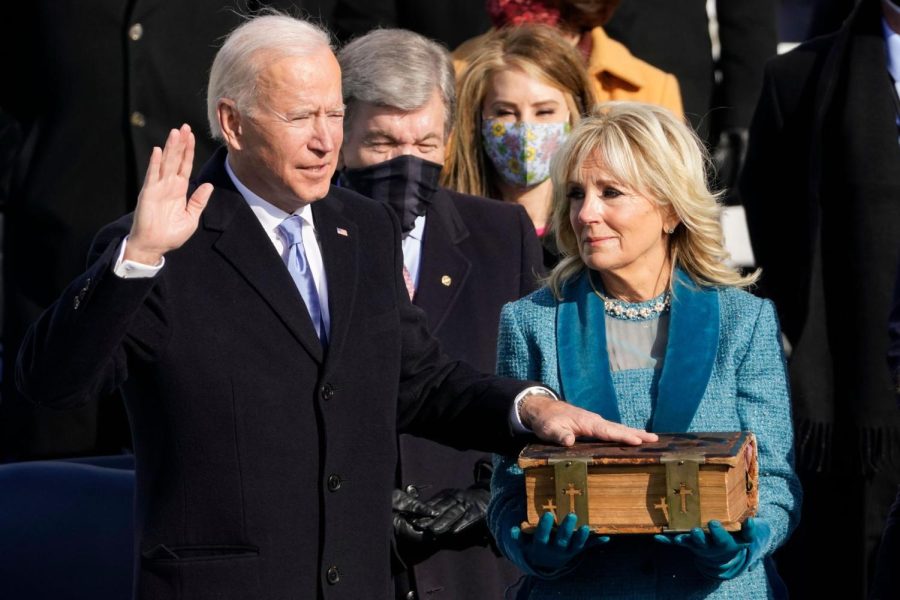 After being elected to office, U.S. President Joe Biden takes the oath of office on January 20th, 2021 on the steps of the capital building in Washington D.C. Credit: The Atlantic

From January 20th, 2021 to January 20th, 2022, U.S. President Joe Biden’s leadership and governing abilities have had an immediate and decisive impact on families, including those of Guilford students – both positive and negative. From the economic creation of job opportunities to the infusion of stimulus money into family budgets to even a stumble in Afghanistan, the successes of his administration have encountered many obstacles, several of which were beyond its control due to their sheer scale, that can also be potentially labeled as failures.

President Biden’s most notable achievement is the creation and passage of an infrastructure bill that injected $1.2 trillion dollars into the U.S. economy to create and restore bridges, roads, airports, public transport, broadband Internet, waterways, and energy systems. The Chicago-Rockford Airport has already benefited from this investment in its recent improvements and expansions. However, one of the intended benefits of the bill, to ease supply chain disruptions has not yet succeeded, resulting in the highest inflation everyday Americans have seen in three decades.  Every student has felt the impact of run-away food prices, shortages of computer chips, and the elimination of the increased minimum wage for those students working.

The President’s other notable achievement in his first 12 months is the $1.9 trillion coronavirus relief package. Designed to assist American families struggling to overcome the effects of the COVID-19 pandemic, citizens received $1,400 in direct payments, unemployment benefits were extended by $300 per week, $20 billion went to those getting vaccinated, $25 billion went to rental relief, and $350 billion went into states and local governments to relieve stretched or otherwise nonexistent budgets. An extra $120 billion was immediately invested in schools K through 12 across the nation. The impact was immediate for Guilford students, as many families could not make rent or mortgage payments, purchase enough groceries, keep their restaurant and hospitality jobs, and receive a full dosage of the Covid vaccine. Not only were students soon qualified for the vaccines, but all students could also receive on-site Covid testing within the building.

Passage of such large spending measures did not happen without drawbacks and setbacks.  The disruptions to the supply chain did not resolve themselves immediately.  In addition, when coupled with the immediate increase in demand for goods worldwide, the effect of infusing money into the economy was the emergence of severe economic inflation, quick in its impacting of family wallets, with an estimated 40% of all U.S. dollars in circulation today being printed since the onset of the pandemic. Guilford Students saw weekly gasoline price increases, for instance. Although lagging, students soon saw higher bills when eating at restaurants, buying clothing, and making online purchases.

Much of the impact of the Biden Administration will not be felt for many years to come, such as the appointment of 41 federal judges, the most appointed since former President Ronald Reagan’s first year in 1981.  These lower court appointments serve as internships for future federal courts of appeals, even the possibility of being appointed to the Supreme Court.  With his resolve to reshape the federal courts to better reflect the demographics of our modern society, four out of five appointments were women, and over half were people of color, a momentous step forward. These appointments will affect all Americans, including current students in years to come, as minority groups in the U.S. truly cement their place as equals to all of their fellow countrymen.

Although the pause on federal executions may have a less obvious effect on the country, it could serve to make citizens and future generations more mindful that mercy is not to be constrained under any circumstances. Such legislation will impact the Alpha generation, the generation after the current generation Z, to separate how society treats criminals, from how it treats their victims.

President Biden’s commitment to combating climate change will more than likely impact each of us for the rest of our lives. President Biden rejoined the Paris Climate Accord to slow the deterioration of the climate by reducing greenhouse emissions by 30 percent in the next 8 years. No more fossil fuel projects will be funded by the federal government –  only projects that use clean energy will receive funding. Still, the U.S. did not agree to end the use of coal to power electricity plants, and the oceans are now predicted to rise by a foot during our lifetime by the time we turn 50. The effect of rising sea tides will devastate roughly three-hundred thousand property values, with the losses including the tax base, having to be absorbed by the entire country, including today’s students in the prime of their financial earning years. The impact of such financial losses will be staggering.

Given the uncertain nature of his first year in office, there is no way to say with certainty as to whether or not Biden’s administration will ultimately be successful in its endeavors, as the time it will take for the effects of his tenure to be truly felt will be greater than his time in office – if they are to be felt at all. After all, what challenges the American People, and especially Guilford students, will face in the coming years and what choices we will have to make, cannot be fully understood within the limited scope of the present.