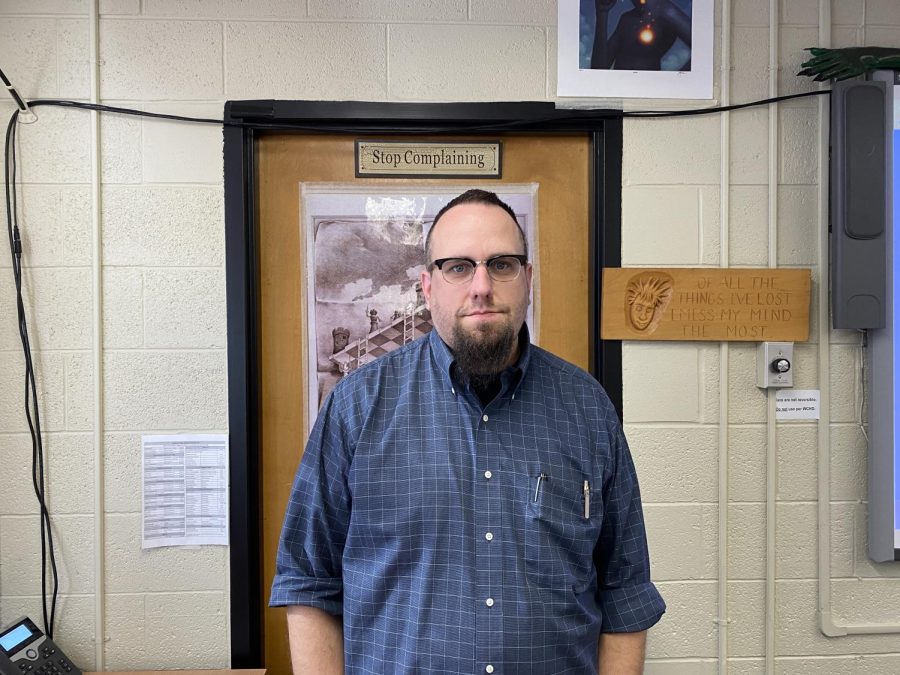 A lot of seniors know Mr. Erik Czerwin as their English 12 teacher. However, many students from all grades also know him as a chess coach.

Many of our students are unaware Guilford has their own chess team. They even compete head to head against other schools. Mr. Czerwin is the coach and founder of this team.

“I actually had no plans to become a chess coach,” said Mr. Czerwin. “I started a chess club at my old job, and the superintendent told me to make it into a competitive team, so I did. When I came to Guilford, I wanted to start a team because once I was a coach for 4 years, I really missed it.  I missed the team and the competitions and the excitement.”

Mr. Czerwin’s love of chess did not start at his old job, though. He has loved the game for many years and is passionate about playing it.

“I did play as a kid, but never seriously,” said Mr. Czerwin. “I started playing more seriously in my final year of college, having discovered a love of the game unexpectedly.”

One aspect that Mr. Czerwin likes about being the chess coach is being able to share his love of chess with new chess players coming to the team.

“I love to watch the players grow and develop their game over time,” said Mr. Czerwin. “Players arrive as freshmen with very little chess knowledge, and by the time they leave as seniors, they’re strong players and young adults.  It’s a fascinating, slow, rewarding process to witness.”

Not a lot of students know this, but the chess team also goes and competes in chess tournaments, and performs fairly well.

“Even through the online school year, we had practices every week and a full season of competition,” said Mr. Czerwin. “And this season, with a bunch of new players, we still finished 3rd in the conference (out of 12 teams). That’s pretty good!”

Despite how well the team performs, not a lot of people attend these tournaments and unfortunately a lot of tournaments have been canceled due to COVID-19.

“We have already had to cancel 2 tournaments due to lack of attendance for various reasons including being quarantined and ineligible,” said Nathan Czerwin, sophomore.

Nathan Czerwin is Mr. Czerwin’s son. Being coached by his dad has been a pleasant experience for him.

“There is an interesting dynamic at practices with me and my dad, but it has been nice because I do have a good relationship with him,” said Nathan Czerwin. “He jokes around all the time, but sometimes I’m the only one that gets them, so we can go back and forth and have some fun with it.”

Nathan Czerwin is not the only student who likes Mr. Czerwin. A lot of the students that he coaches seem to love him as a coach.

“I like Mr. Czerwin because he is a really nice teacher and if we need help in something he always helps us,” said Arya Patel, sophomore.

One thing about being a coach is having a hard time balancing both coaching and teaching, and Mr. Czerwin struggles with this as well.

“From August through February, chess is all-consuming,” said Mr. Czerwin. “But teaching is a 50 hour a week job, too. So the first half of the school year is always super busy for me.”

Despite it being time consuming, he still really enjoys being a chess coach as well as an English teacher.

“It takes a lot of time, but the rewards are well worth it,” said Mr. Czerwin.