Squid Game: the show that took the world by storm 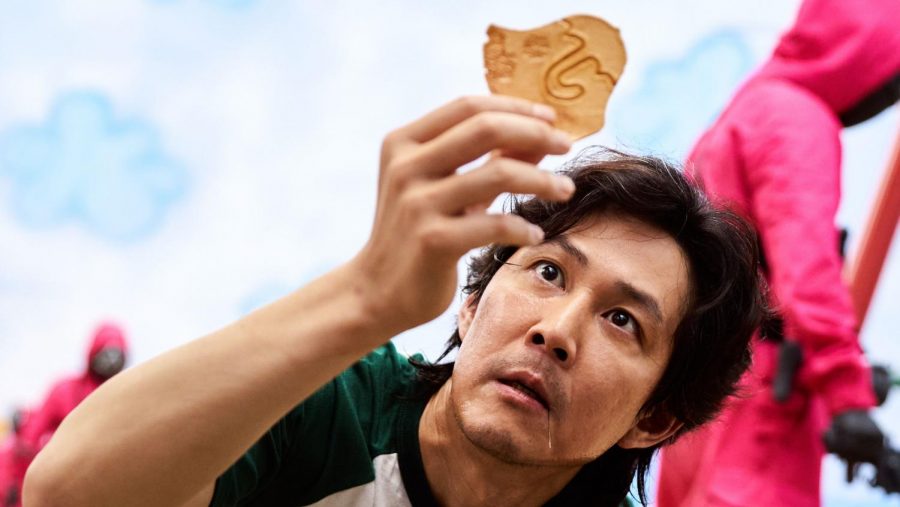 Easily the most talked-about show of this year, Hwang Dong-hyuk’s Squid Game has been unavoidable and rightfully so. Everything from the concept, the characters, and the cinematography have been attracting a wide range of people from all over the globe.

In the first episode, we’re introduced to our protagonist, Seong Gi-Hun. To put it very lightly, he is a mess of a father and son, with close to nothing going for him in life. This leads to what I really like about the characters in this show: their portrayal. Although the characters participating in the games are poor, none of them are shown as helpless victims that aren’t doing anything to get themselves out of their financial situation, like other films tend to do. All of them have a common desperation to win the prize money, which makes everything in the show just that much more intriguing, because you want to see them succeed and you want to see just how desperate they can get.

The friendships that get formed throughout the games also left a big impression on me, especially between Gi-hun and the old man, and the unexpected friendship between Sae-Byeok and Ji-Yeong, which sparks towards the end of the season. They both made me shed a few tears, which I wasn’t expecting to do when I first started watching this series. A lot of Gi-hun’s positive traits like loyalty and kindness are shown through his interactions with the old man, which adds a lot of humility to him and makes him a good main character to watch and root for. On the other side of the coin is Sae-Byeok and Ji-Yeong, which was an unexpected friendship due to both of their cold personalities.

Easily my favorite thing about the series is that it’s just so good to look at. Everything from the room with the pastel staircase, to the anticipated V.I.P’s introduction, and everything in between, it’s all just so nice to look at. As someone who loves visuals, I really appreciate it. The setting and how it’s shot adds to every scene so much. Easily my favorite example of this, is the violent “riot scene” in the fourth episode. What sparked the riot was Deok-su killing someone outside of a game and the prize money increasing, reminding everyone that every time someone dies the cash prize will be increased. You can really feel the desperation of every character in that scene, as the one place that was once peaceful turns into an all-out battleground, and you can really feel just how intense it is. Although they go a bit overboard with the flickering lights, it’s a scene that makes you hold your breath, and is personally one of my favorites.

Overall, this season of Squid Game is amazing, and I can’t wait to see what happens in the next season. The way the season ends just leaves me, and plenty of other viewers, wanting more.