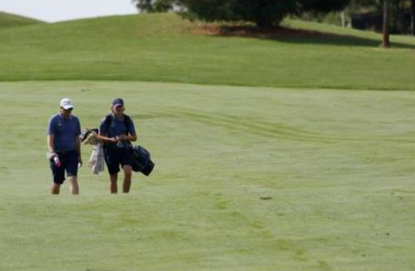 Junior Andrew Carey has become the first Guilford student to make it to the Illinois State Golf Competition in 11 years. He placed 37th in the competition, with a total of 153 after both days of the tournament held on October 8 and 9.

Carey has been on the Golf team for three years, but he has been golfing since he was 12. He competes in tournaments across the midwest, and in the south during his off-season.

Carey intends to continue his golf career into college.

“I would love to compete in college at a high level, but I don’t have any schools lined up right now,” he said.

While Carey is one of the eight boys golf team members, golf is an individualistic sport. The independent aspect of it is part of what keeps him playing from year to year.

“I like the individuality, and the responsibility you have to take in your own performance, and the challenges presented of not having a team to fall back on,” said Carey.

Even if golf is a solitary sport, the people who support Carey still play an important role in his athletic career. One of his favorite experiences during his entire career has been his time at the State Competition.

“It was a great experience to be able to represent yourself and your school with the best in the state,” said Carey. “And being able to spend my whole state competition with my coach, Dan Cameron, and my family.”

Carey’s family has been important to him throughout his whole golf career. His dad has been especially supportive of his golfing.

“My dad has come with me to almost all my tournaments and matches, and is very invested in me,” said Carey.

While golf may not necessarily apply to all aspects of life, Carey said that he has received advice that is relevant not only to the sport but to anything he does in life.

“Even if you are performing below your expectations, it’s equally important to present yourself with dignity, win or lose,” said Carey.