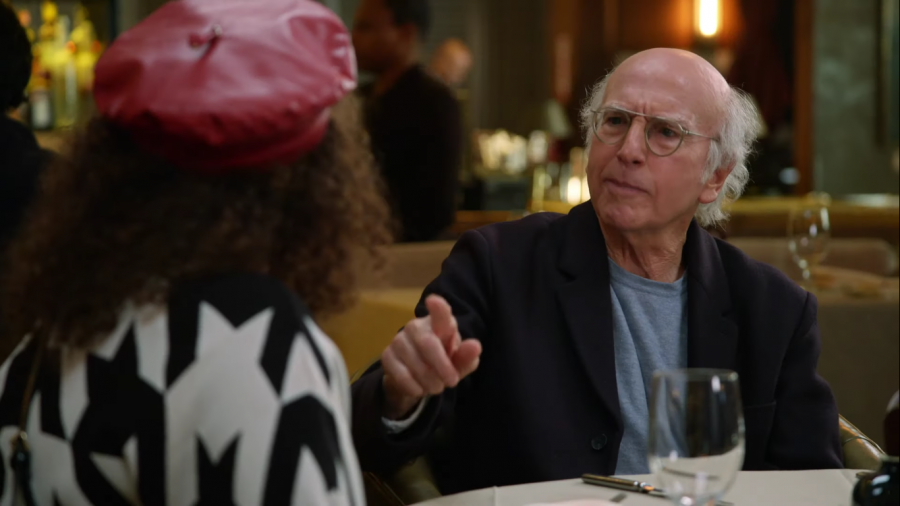 Episode two, titled “Angel Muffin,” starts with Larry David and his manager Jeff Greene sitting in the Netflix writing room, talking about Young Larry. Don Jr., the person in charge of the Young Larry project, mentions how they need to cast someone to play young Larry. Larry agrees, and Don Jr. throws out Dylan O’Brien’s name, and says that he would be perfect to play Larry. Larry says that he is interested in seeing O’Brien play a younger version of himself, and Don Jr. sets Larry and Greene up to go to see O’Brien’s band perform.

After the meeting, Larry goes into the bathroom and struggles to keep the toilet seat up because it keeps going down. In typical Larry fashion, he goes back into the writer’s room to make a fuss about it, and Don Jr. says that he will work on getting it fixed.

Later that day, Larry goes out to lunch with his roommate, Leon Black, and his new girlfriend, Mary Ferguson. After the meal, Larry looks at Ferguson’s plate and sees that she has a few slices of steak leftover, and asks if he can have some. She refuses, because she says she is going to wrap it up in a doggy bag to give it to her dog, and Larry gets into a big argument with her about it.

That evening, Larry and Greene go to O’Brien’s concert. The music starts playing, and it is some of the worst music to have ever been played. Larry turns to Greene, and takes out a tissue that he had in his pocket. He rips off four little pieces, gives two to Greene, and puts the other two in his ears to block out the noise. After the concert, they head backstage to meet O’Brien. O’Brien quickly gets offended by Larry having tissues in his ears and asks him and Greene to leave.

The next morning, Larry and Greene go back to the Netflix writer’s room and try to explain the situation to Don Jr. Don Jr. says that they may be able to get him back, but that he will start looking at other people to play a younger Larry. Greene says that it’s time to go, and they head out. Before they leave, though, Larry, of course, has to bring up the fact that the toilet seat isn’t fixed. Don Jr. says he told the handyman, Julio, about it, and the two of them leave.

Later that day, Larry goes to his dentist appointment. He fills out the sign in sheet. This is definitely insignificant and doesn’t add to the story in any way shape or form, but it made me laugh a ridiculous amount. When Larry left the table, he went to go sit down and there were three chairs lined up next to each other. A woman was sitting right in the middle, so Larry was forced to sit next to her. The first thing he said to her, was “You really had to sit in the middle,” and this made me die of laughter because it’s such a typical Larry moment.

Larry’s dentist, named Dr. Thanapapalous, sat Larry in the chair, and was about to give him his cleaning. Dr. Thanapapalous had loud music playing, and Larry asked him to turn it down. This offended Dr. Thanapapalous, because he was playing Greek music, and he is Greek, so he felt like Larry was disrespecting his heritage. He tells Larry to leave, and so he does. On the way out, Larry runs into Julio, the same handyman at Netflix, who also works at Dr. Thanapapalous’ office. He asks him if Don Jr. told him about the toilet seat, and Julio told him that Don Jr. never mentioned it to him, which made Larry irritated.

Larry heads back to his house to find Leon and Ferguson hanging out. Ferguson asks Larry and Leon to watch the dog. Larry reluctantly agrees to watch her dog. She tells him that the dog’s name is Angel Muffin, to which Larry responds by laughing in her face and saying that, “a five-year-old would name their dog that.” Larry says that he is never ever going to call the dog that because it would be “humiliating” for him to do so. The dog then throws up in Larry’s living room, and after Larry gets mad at Ferguson, she says that the steak that she brought home from the restaurant in the doggy bag made Angel Muffin sick. This may not seem like a big deal, but I love this moment so much, because it is a callback to an earlier episode from season six called “The Lefty Call,” where one of the characters brings her dog leftovers in a doggy bag and her dog, Oscar, throws up. This is one of the reasons I love Curb Your Enthusiasm so much. There are always callbacks that long-time fans of the show will really appreciate.

Larry takes the dog for a walk, and notices that O’Brien is sitting outside of a restaurant. He remembers that O’Brien loves dogs, and made sure that O’Brien saw him with the dog. O’Brien calls Larry over to come sit with him, and they talk for a while. At the end of their conversation, O’Brien agrees to give Young Larry another shot. After that, Larry says he has to go, and the dog gets away from him. The dog runs away so far, that he gets hit by a car. The dog is okay, but someone standing around quickly points out that Larry didn’t say the dog’s name to get him to come back. Larry responds to this by saying, “I can’t say the dog’s name.” O’Brien sees this, and the scene ends with Larry looking at O’Brien while he shakes his head disapprovingly at Larry.

The next shot opens at the Netflix writing room. Don Jr. now knows that they will never get O’Brien in the show, and says that he will start thinking of some other actors. Larry agrees, and Greene and Larry go to exit. Before they leave, Larry mentions to Don Jr. that Julio said he never mentioned the toilet seat to him. Don Jr. gets mad at Larry for accusing him of calling him a liar, and tells Larry to take his show elsewhere. Larry agrees and they leave.

Later that day, Larry heads to Dr. Thanapapalous’ office and apologizes to him. Dr. Thanapapalous accepts the apology and gives him his cleaning. To drown out the music, though, Larry puts tissue paper in his ear. Larry couldn’t hear this, but he was complaining about the handyman Julio lying about cleaning the toilets and said that he is not a very good worker. That’s how the episode ended, and I actually said out loud “Why did they have to end it there?!” Curb Your Enthusiasm episodes are already typically forty minutes long, but I think that the episodes should be even longer because they are that amazing.

Episode two was a very funny episode, and full of jokes that made me laugh very hard. I think that the first episode of the season was better, but this isn’t a bad episode at all.

Episode three will premiere on November 7 at 10:30 EST/9:30 CST, on HBO and will stream concurrently on HBO Max.