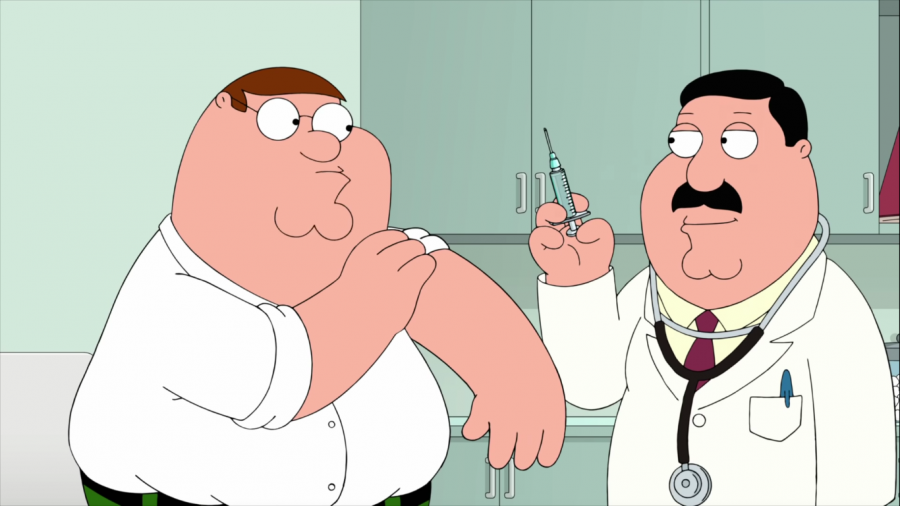 Let me start this review by saying that I despise Family Guy. I would even go as far as to say I think it is one of the worst shows on television. I am a fan of Seth MacFarlane, the creator, but I think that Family Guy is one of his worst projects. The flashback comedy, which makes up most of the show, is pointless and stupid, the humor is tasteless and lame, and there has never been an impressive episode in the show’s run besides the Star Wars spoofs. Even then, the material was already written for them, and the only reason it was humorous was the fact that it was Star Wars. However, something that I hate more than Family Guy is COVID-19 vaccine misinformation being spread.

MacFarlane came out with a video using the characters of Family Guy to explain that COVID-19 vaccines are perfectly safe and would protect ourselves and each other.

In the video, Peter Griffin, the main character in the show, is in the doctor’s office with his dog Brian and his son Stewie, and he is waiting to get his COVID-19 vaccine shot. Peter is a bit hesitant to get the shot, and Stewie and Brian explain to him why the vaccine is a good thing, and tell him why he should get it.

He later goes on to explain certain proteins, which are in some of the COVID vaccines,  resemble the spike proteins that are in the virus, but do not cause harm. The proteins are used to train your body in case you do get sick. He also mentions that when the virus tries to infect you, and when the antibodies fight the virus, memory cells will be created to remember how the virus was fought, and therefore the virus will be much less likely to infect you in years to come.

Later on, Stewie talks about anti-vaxxers and people who are skeptical of the vaccine. Some people say that the vaccine will make you feel sick. However, the side effects only last a few days and are far less damaging than COVID. Brian also talks about people who think to themselves, “Everyone else is going to get the vaccine, why should I?” Stewie quickly points out that when the virus spreads through an unvaccinated public, it could mutate into more dangerous forms that the vaccines are unable to protect against. This is even starting to happen with the Delta COVID variant being even more communicable.

While the video is well done and full of facts, this still was not funny. The few jokes that were in this video did not make me laugh even once. Seeing the characters of Family Guy get the vaccine did not do anything for me, because the characters of Family Guy are meaningless to me as I loathe the show. If you are a fan of the show, however, I see you liking everything about this video. Seeing some of your favorite characters get the vaccine will be more enjoyable for you than it was for me. While this video may not seem like a lot, it might get some unvaccinated Family Guy fans to get the vaccine, which I think is the strongest part of the PSA.

The video is very informative, no doubt. It even taught me a few things about vaccines and how they work. As a Family Guy hater, it takes a lot to admit that I learned a lot from this video.

The Family Guy COVID vaccine PSA is available to watch for free on YouTube.