Is Infrastructure an Investment in the Future of Guilford Students? 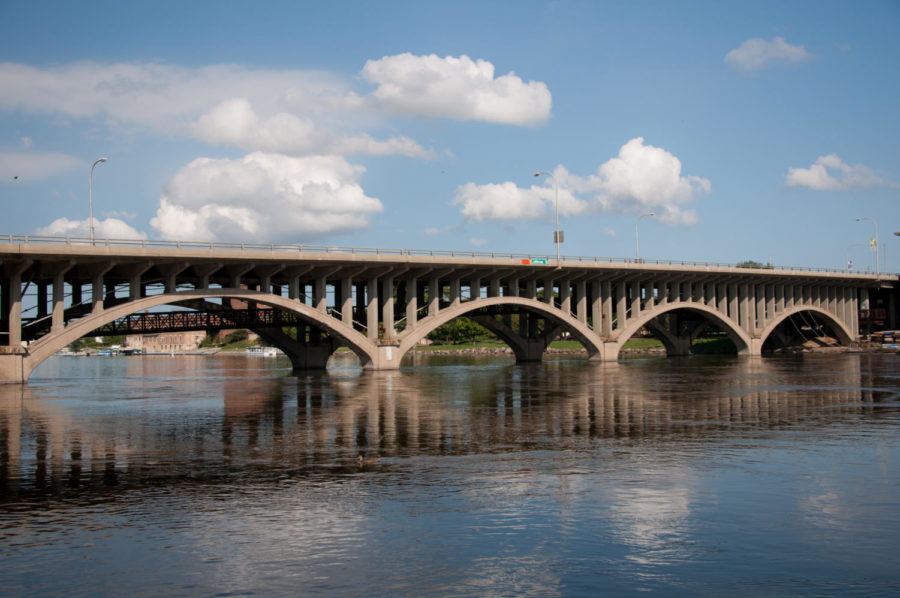 Jefferson Street Bridge over the Rock River in downtown Rockford is one of 41 bridges in Winnebago County labeled as "structurally deficient" according to the Federal Highway Administration. Image: Wikimedia

How important can infrastructure be to Guilford High School students? Soon graduating seniors will face either paying rent or paying for room and board at colleges and universities. Part of infrastructure are the apartments, buildings, and roads, which have been crumbling since the Reagan era. Does this crumbling infrastructure mean that Guilford students will soon be paying higher rent, higher property taxes, and higher tuition to pay for repairing or replacing the remains of the nation’s infrastructure? And, why is so much infrastructure needing such extensive repairs? And, will our generation be able to afford it, or will we soon be forced to contend with it?

President Dwight D. Eisenhower implemented the nation’s first interstate highway system in 1956, the costliest endeavour undertaken since the second World War, which had ended only 11 years prior. How did President Eisenhower accomplish this? At the time, the top income tax rate was 91% for those making $200,00 or more a year (adjusted for inflation, that is $1,930,763 as of the time of writing), and corporations paid approximately a third of the cost to run the government – including paying for the new, modern highways. In 2019, corporations received a huge 14% tax break, from 35% down to 21% in the bill passed, and voters went along with their Congressional representatives because it would “trickle down,” eventually increasing household income by up to $4,000 a year. While impressive in theory, two years later, very little evidence supports that the tax cut had reached the typical American household. As to where those profits not put into taxes went? Certainly not into infrastructure for the common man.

Back on the homefront, Guilford students who hold a job know full well how much taxes, including FICA (or Social Security), are taken out of their paycheck. Moreover, if the student is under 18, they cannot vote, which goes against one of this nation’s founding principles – taxation without representation is theft. Warren Buffet, billionaire investment mogul, has stated on multiple occasions that he pays a smaller percentage of his income than his secretary, who was paid a measly $100,000. In another case, despite making almost 5.6 billion dollars in profit in 2017, online retail giant Amazon paid $0 in federal income taxes. Why the disparity? Is it not the principle behind paying taxes that every American should pay their full share, that all men are created equal?

If the infrastructure bill now before Congress is passed somehow and soon, economists predict it will create hundreds of thousands of well-paying jobs. Graduating seniors could fill those jobs–the sooner, the better. The bill, however, has had a murky reception amongst Republicans in Congress. Conservative talk show hosts, who are paid several millions of dollars, say it is an attempt to normalize socialism by the Democrats. Is it not necessary for greater collective spending by the American people to maintain and build a better future for today’s high school students? Is it not legislation for infrastructure spending, similar to what President Eisenhower did? Is it not President Franklin Delano Roosevelt’s campaign slogan “Make America Great Again,” just what an infrastructure bill would do? Conservatives have adopted FDR’s slogan. So, why are conservatives in Congress, on television, and among the super rich and largest corporations spending money to stop the bill? Could it be that the wealthy do not want to pay taxes (and usually do not), do not want to pay for such financial safety nets such as social security, and do not want the government telling them they cannot dump their pollution into the streams and onto the land?

An administrator, who prefers to remain anonymous, said that not investing in the infrastructure of the Rockford schools is a poor investment for the community as the cost literally doubles each year the infrastructure is ignored or put on-hold. Walk into all but the newest schools in the stateline and see for yourself – the dilapidated state of the schools of the most wealthy nation on Earth is appalling. One solution is that the district could raise property taxes more on the homeowners again to pay for infrastructure, or the Congress could pass the infrastructure bill that offers money to repair and upgrade schools across the country. How special would former Guilford High School students feel to have well-paying jobs fixing the infrastructure of the school they attended? How much pride would these alumni have in knowing and even working to maintain or improve their alma mater? Former Vikings may very well surprise everyone.