Read the poem Jocelyn read in a video for the awards ceremony at the end of this story. (This story received an Honorable Mention Award, Kettle Moraine Press Association, October 2021) 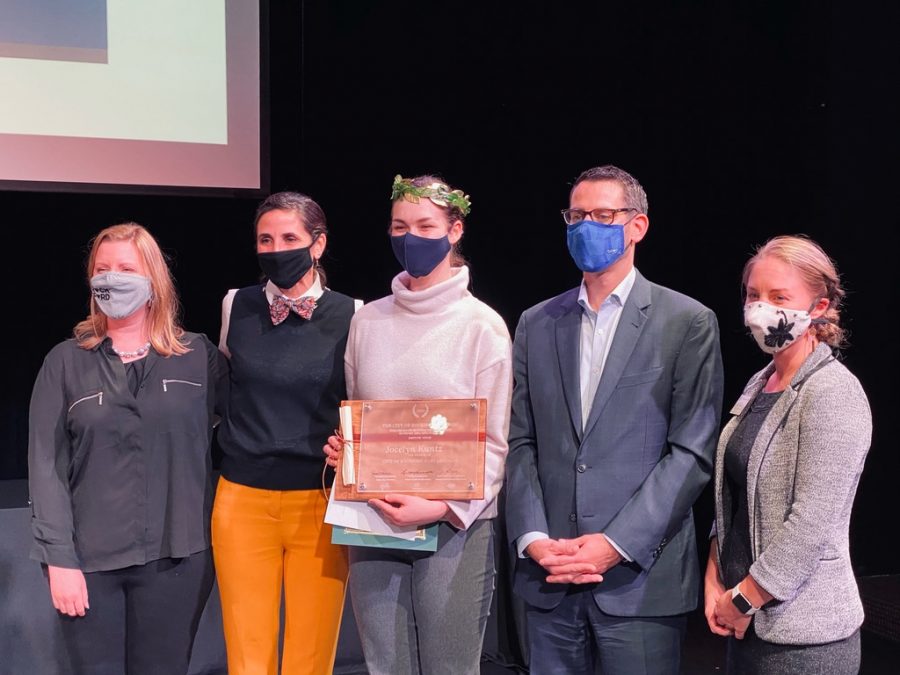 “I was very surprised [when I won]” said Kuntz. “I was very excited. I was very, very happy, and honored to have won.”

The decision for Poet Laureate was some months in the making. Kuntz applied all the way back in May. She sent in a bio about herself, a resume, and a poem for the judges to read. Based on these, the judges decided a finalist, one of whom was Kuntz. In August, each finalist was interviewed and recorded. The judges then made their final decision based on that.

Kuntz has been writing since she was young, and became a published author early on. She is also a member of the Rockford Writers Guild. She enjoys using many different writing styles, from essays to fiction to poetry.

“The Rockford Writers Guild is the main one, but I have [also] participated in events with the Rockford Area Arts Council and the Rockford Public Library.” said Kuntz.

While she holds the title of Youth Poet Laureate, Kuntz plans to hold outdoor meetings and events to support young people writing.

“I would like to start some outdoor events, especially as it gets warmer outside, where we could have young people go and meet in different locations throughout the city to share poetry or anything they’re working on.” said Kuntz.

The award winning poem that Kuntz wrote was about COVID-19 and its effects on the city. Continuing on that theme, Kuntz wants to create a city poem, written with the combined efforts of Rockford citizens.

“I’d like to have a city poem. Poems from different people around the city, and take an excerpt out of each, and then create a poem about the city of Rockford, and what it means to us.” said Kuntz.

The title of Youth Poet Laureate lasts for two years before it is given to someone new. During that time, Kuntz plans to make the most of it.

“I think that a lot of time, poetry can be overlooked, here and pretty much everywhere,” said Kuntz. “Poetry is always there, but it’s more sidelined… It’s important to bring more focus to it.”

For those lost, too young to die

Names immortalized by our rising cry

As our calls for change carry high

No more tagging, it hides the tears

The creations made by the light of flares

COVID-19 has turned life into chores

We change our habits for our health and yours

The futures we had planned now have closed doors

We adapt and change however we can afford

Even if there isn’t always a reward

Building our city up board by board