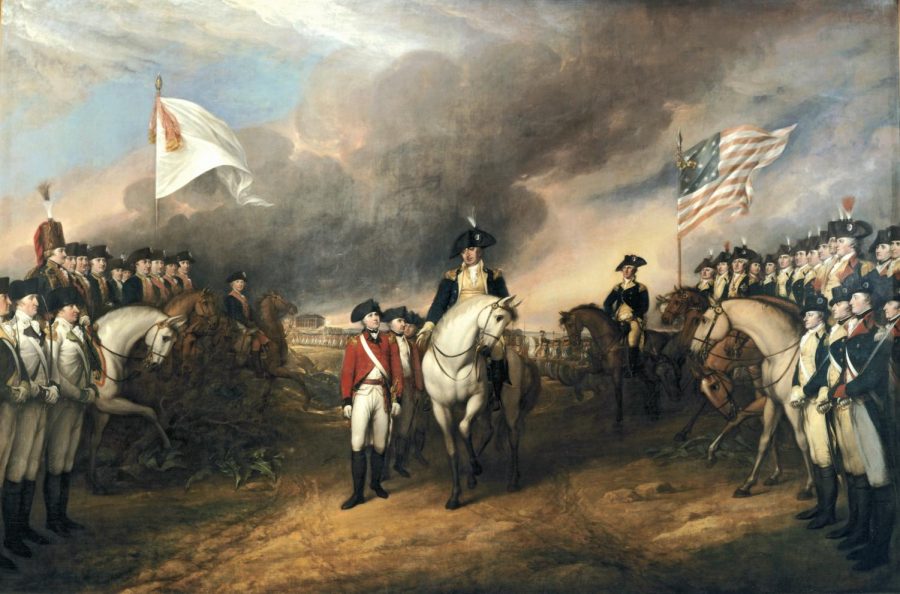 On October 19th, 1781 the most decisive and influential battle in American history came to an end. The stunning defeat of Lord Cornwallis’s British army, to the combined effort of George Washington and Comte de Rochambeua’s American and French forces in a decisive victory.  The victory at Yorktown cemented American independence as more than an idea and led to the official end of the American war for Independence in 1783.

The first steps to the battle of Yorktown didn’t start in Yorktown, but rather started in Rhode Island. In 1780, 5,500 French troops under the command of French General Rochambeua  arrived at Rhode Island to assist the colonial forces. . These troops were to reinforce George Washington’s smaller army of 3,000 men. Washington and Rochambeau immediately started planning their next attack on the British. Conflict between the two leaders began immediately. Washington wanted to attack the British forces deployed in New York, hoping with the combined strength of both the American and French forces could win a decisive battle in the northern colonies. Rochambeau wanted to support American general and fellow Frenchman Marquis de Lafayette. Ultimately the decision would be up to none of them, instead it would be up to Admiral Comte de Grasse.

Meanwhile in the south major decisions were being made. Lord Cornwallis, his army still reeling from the battle of Guilford’s Courthouse, planned to attack the much weaker American army led General Lafayette at Richmond.  Lafayette, knowing of the British advance, retreated and combined forces with General Stueben and General Wayne’s forces. Cornwallis, upon hearing this, pulled his forces back to Yorktown and prepared defense for a potential attack.

At Rhode Island news of Admirals de Grasse intentions had arrived. He would set sail for the Chesapeake Bay outside of Yorktown. Washington and Rochambuea, upon hearing this, knew they had a unique opportunity to encircle and eliminate Cornwallis and his army. They began to march their armies south, setting their sights on Yorktown. Orders were sent to a reinforced Laffayette to prevent Cornwallis from escaping. Victory had to be achieved here, the nation’s fate was at stake.

Admiral de Grasse’s fleet arrived in the Chesapeake Bay, blocking off all of the British ships and the British army and preventing an escape from Yorktown by sea. With Laffayette blocking off Cornwallis by land Cornwallis was encircled. The British did attempt to break out by sea, sending an armada from New York with the purpose to break through the French fleet and relieve Cornwallis. The French and British vessels  had a brief exchange resulting in the British fleet retreating back to New York. Cornwallis would remain trapped.

In late September Washington and Rochambuea arrived at Yorktown, and immediately began to prepare for a siege. Allied forces, now numbering 7,800 Frenchmen and 11,100 Americans faced off against some 8,000 British troops. Cornwallis, realizing the total number of troops he would be facing, pulled his forces from all but two of the outer defenses to create a tighter defense within the city. French and American forces were quick to capture the two remaining forces, using an advance of “cold steel”, keeping their muskets unloaded until they reached the redoubts. After a brief firefight the redoubts were captured and cannons were deployed in the abandoned defenses. Washington fired the first shot that would start the siege. The capture of the redoubts meant that Yorktown would be bombarded from the south and east, and to the west by the French fleet. After several failed attempts to break out across the York River by the british Cornwallis made the decision to surrender. On the 17th of October a drummer boy and an officer waving a white handkerchief emerged over the defense. After two days of negotiations the siege was over, and as a indirect result, the American Revolution itself would be over.

The victory of the American and French armies over the British boasted American morale at home while stifling British support at home. Lord North, the British Prime Minister, upon hearing the news exclaimed saying “Oh God, it’s all over”(Gov.Uk, Past Prime Ministers). When the British army surrendered to the Americans it was said that some had tried to break their rifles while others appeared to weep or be drunk. In total the American and French forces captured 8,000 troops, 214 artillery pieces and thousands of muskets.

Even though the siege had major significance, casualties were relatively low with only 60 French deaths,  28 American deaths and 107 British deaths. The losses suffered by the combined effort of the American and French troops were not in vain. The loss made the British open negotiations with peace being agreed to in 1783. Yorktown is often remembered as the killing blow to the British and was the battle that turned an independent United States from a distant dream into a reality. In the words of American General Marquis de Lafayette “Humanity has won its battle. Liberty now has a country” (Cornell University, Lafayette Collection, 2006).