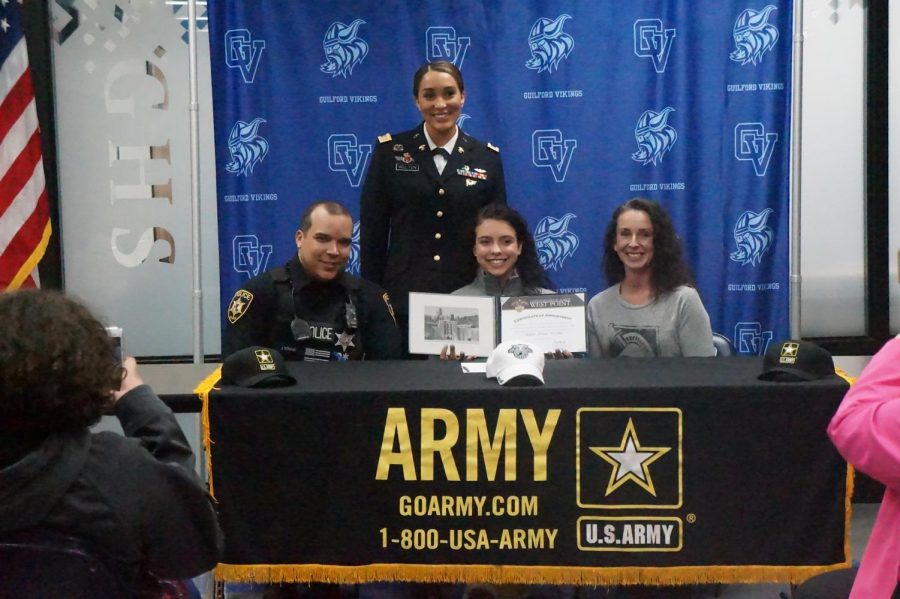 On Wednesday, March 11, senior Rylee Strand signed to attend the prestigious United States Military Academy at West Point. According to their website, West Point aims to “educate, train, and inspire the Corps of Cadets so that each graduate is a commissioned leader of character committed to the values of Duty, Honor, Country and prepared for a career of professional excellence and service to the Nation as an officer in the United States Army.”

Rylie is the second Guilford student to go to West Point in recent years. In order to do this, Rylie maintained a strict fitness regime, working out daily and maintaining a careful diet.

“Rylee is 100% physically fit, I know she’s been working really hard in order to come in as a top competitor while she’s with her classmates this Summer.” said Rylee’s recruiter, Lieutenant Avrie. “Academically, she’s been killing it since day one. I have absolutely no doubt that she’s going to come to West Point and succeed in the classroom as well.”

Along with being physically fit and mentally prepared, West Point cadets also have to be good leaders and have strong character and morals. As the West Point website says, “Moral-ethical development is central to the 47-month West Point experience and is explicitly mandated by the Academy’s mission statement. The emphasis on personal character is to support the West Point Motto – ‘Duty, Honor, Country’ – and the ideals of the seven Army Values: loyalty, duty, respect, selfless service, honor, integrity, and personal courage.”

“I already know that her leadership skills are amazing,” said Lieutenant Avrie. “And I am excited to see how they develop over these 47 months.”

“West Point started pursuing me first,” said Strand. “I got a letter in the mail and it all  just steam-rolled from there.”

At the signing were many of Strand’s teachers and Principal Gus Carter, as well as her family and friends. Lieutenant Avrie spoke, as well as Mr. Carter, Strand’s mother, and a few of her teachers.

“I am very excited to go!” said Strand.