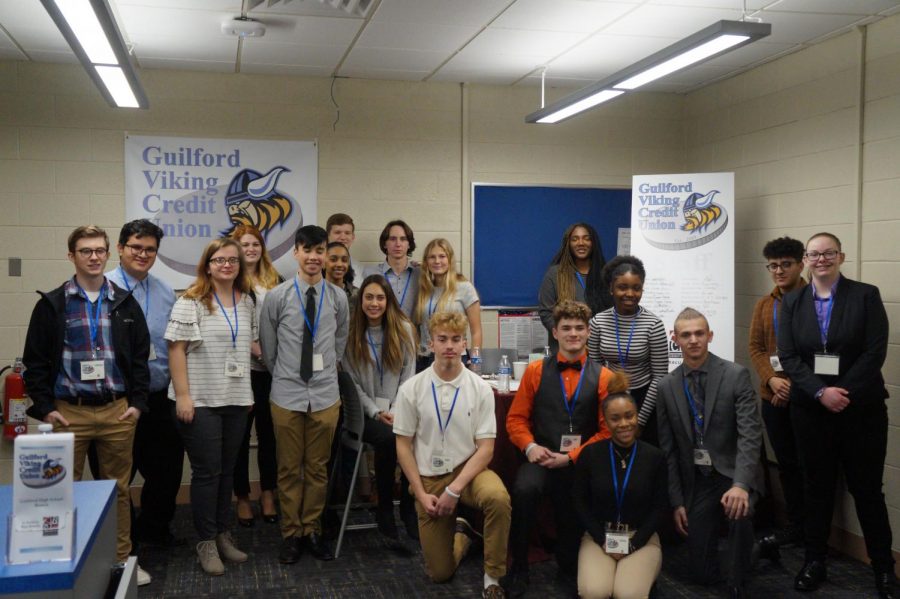 High school students need and use money everyday, but all the while face the obstacle of banking off-campus and outside of school hours, often without guidance or direction from banking professionals.  However, with the opening of a full-service, student-run branch of Rockford Bell Credit Union office inside Guilford High School, Guilford students became the first high school in the Rockford area to experience their own banking, manage their finances, and receive an opportunity to work in a real bank. Better than an automated teller machine, students will now be able to save, use their own debit card, and open a checking account in person and in their own names.  It doesn’t get any more real life than this.

“It will be a little bit different, because instead of having to go to a bank or anything, you can just go into this office [in the cafeteria commons area] within the school, you don’t have to leave school grounds,” said Mr. Wally Haas, Chairman of Rockford Bell Credit Union.  “If you need a couple bucks, you can come here,…open up an account, and you’ve got money there….you can save for whatever you have coming.”

The concept of having a banking-type facility on Guilford’s campus was introduced to Principal Carter when he was first brought on as building principal for Guilford in 2017. However, due to the fact that it had never been conceptualized within RPS 205 before, it was a monumental task.

“This was the original vision, my understanding is Rockford Bell years ago wanted to come up with a plan for how to educate their youth and after a couple years and different ideas, the idea of opening up a credit union in a high school offered not only a way to involve high school students in the process but to also be a learning experience for them,” said Mr. Carter.

“This is what our students need,” said Mr. Carter. This is my goal for Guilford, and a goal as principal…to make sure that every student has an opportunity to experience something that will motivate or drive him or her to either know what [career] he or she wants…or what they want to major in…college.”

Now that the credit union is open, Mr. Carter has opened the door to future expansion of the curriculum via the introduction of local businesses within Guilford’s campus.

“So, what’s next for the credit union is just to watch it grow,” said Mr. Carter. “Get more students involved, get our staff involved, and just watch it grow and become a functioning branch of Rockford Bell. Where can we do this again?  What’s the next partnership, what’s the next community partner business organization that wants to come in and partner with a large group of our students to give them a real world experience that these kids in the business academy with the credit union, that’s what we’re always looking for.”

“For Rockford Bell, we are going to see how this develops, and perhaps we’ll try to form partnerships in other schools,” said Mr. Haas.