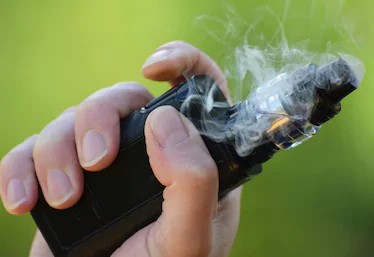 For teenagers in 2019, vaping is becoming more of an issue. Vaping is quickly being revealed to be more addictive and causing more problems, specifically for teens.

People have many outlooks at how they view vaping and the culture that surrounds it. Some view it as a trend, others simply enjoy it, while many vape because they believe it helps with their problems to cope with life, and others refuse to vape, possibly because they hear about the many health effects on your body from vaping.

“There is so much research out there that’s bad,” said one sophomore female who prefers to remain anonymous. “There is research on people getting diseases from vaping. I’d rather not get popcorn-lunged at fifteen if I can help it.”

Many teens believe that vaping is becoming a bigger issue and know that there will be consequences for people, especially teens, who vape. Some people believe that kids or teens who vape think that they are cool, or are doing it because they think it is trendy.

“I feel like some kids are influenced by the other kids because they think they look cool doing it, so they want to follow them,” said Melanie Paz, sophomore. “Some do think about the consequences, but some don’t really care and do it anyway. It affects them mentally.”

“I think kids are influenced by their peers to vape because kids might think they will be cooler if they do it,” said a junior female who prefers to remain anonymous. “Everyone else is doing it, so why shouldn’t they?”

The nurses at Guilford have information about the consequences of vaping that all teens and young adults should know. They explained how being a teen and vaping will have more negative effects than it would if it were an adult.

“I think a lot of teens think that vaping is safe because you don’t have the tar and some of the chemicals of smoking, but they need to know about the dangers of nicotine,” said Mrs. Amy O’Reilly, school nurse. “Nicotine is much more dangerous to the development of the adolescent mind than it is even to adult minds.”

Mrs. O’Reilly explained how nicotine can affect and/or begin to damage the adolescent mind because the brain is still developing and isn’t completely developed until the age of 25. Since the teenage brain is drastically more sensitive than adults over 25, addiction damages adolescents much more.

“The adolescent brain is actually more sensitive to nicotine. So addiction sets in, they’re saying with teens, in one to two days,” said Mrs. O’Reilly.  “The earlier you start, the harder it is for you to quit. It also interferes with your brain development (Prefrontal Cortex), it can affect your ability to learn, ability to pay attention, to organize, and to regulate your emotions.”