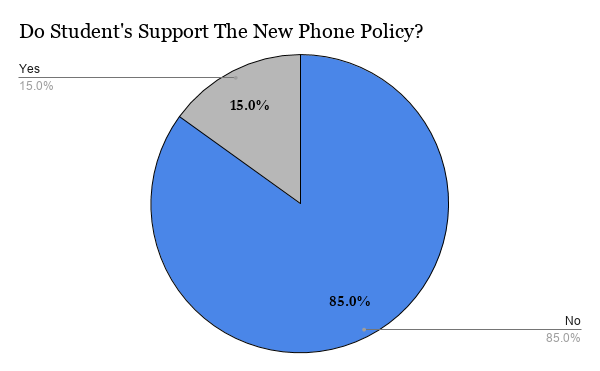 Since word got out at the start of registration, students and teachers have had a lot of differing opinions about the new rules regarding technology confiscation. Starting this school year, if a student makes the choice to take out their phones, headphones, airpods, or smart watches without permission, administration and teachers have the right to confiscate it, send it to the office and let a parent or guardian come and pick it up.
Opinions range between students and staff. One main concern with students is if someone tries to contact them during school hours.
“They shouldn’t take phones in case there is any emergency during school hours,̈ said Aiden Steingraber, sophomore. “My grandma or other relatives might need to get ahold of me.”
Other students are concerned with the pure loss of their entertainment during school hours.
“It restricts time to text girls during school,” said Andrew Flynn, sophomore.
The new technology confiscation rule, however, does have a positive side.
“I don’t think teachers should be so harsh with the rule, like if I want to listen to music while I work, it’s not really a distraction,” said Owen Dahlberg, sophomore. “But my battery does stay charged a lot longer now. I guess it just depends on the situation.”
According to the Washington Post, this never ending instant access to all information has led to many misconceptions about technology in American schools. “A Pew Research survey found that almost 90% of teachers believe that technology is building an easily distracted generation with a crazy short attention span. Around 60% claimed it was causing people to have a hard time conducting face to face conversations. Around 76% said that because this generation has the ability to find out information and answers quickly, it’s caused a great loss of concentration in classrooms.”
However, some fail to understand that most educational resources are only available online now. According to TechJury.net, this generation is used to being glued to a digital screen, and society has adjusted to it. The world is now creating over 1,000 (50% in China) apps per day listed on play stores and Apple stores. Statistics show a dip of 33.9% less downloads for games since 2017. App downloads are predicted to reach 260 million by 2022. (“51 Jaw Dropping App Usage Statistics & Trends, 2019”)
“The new rule is penalizing children for not doing anything wrong, but it does teach us the whole trial-and-error lesson and we can take that to help us in the future,” said Gabriella Zapata, sophomore. “So when kids get their phones taken away, they’ll learn for next time to not take it out because teachers take the rule seriously.”