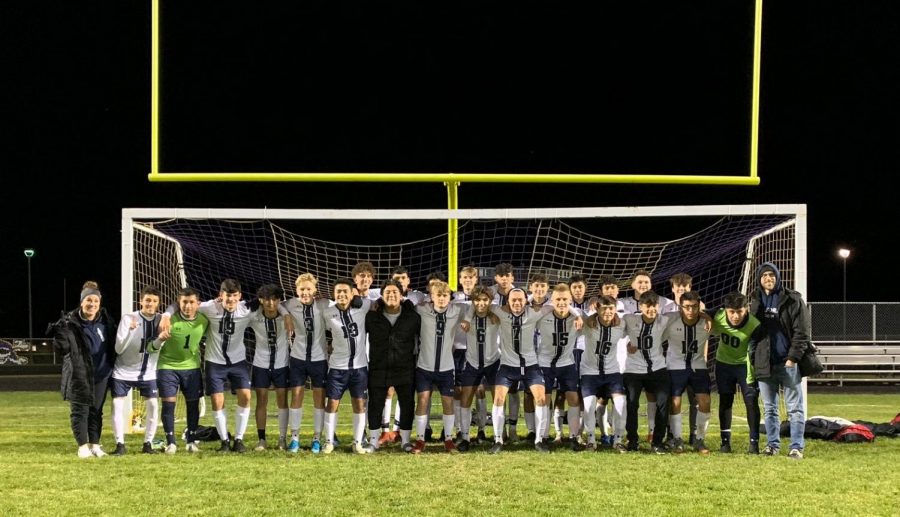 October 3, 2019, was an unforgettable day for the varsity soccer team. Playing one of their most competitive schools, Boylan Catholic High School, Guilford took the game home. Most of the game was tied at 0-0; finally, after overtime, the Vikings won through penalty shots with a final score of 7-6.
“In that game that’s when our varsity team broke Boylan’s win streak,” said Bryan Cuevas, sophomore.
The varsity team ended their season winning all of their conference games with the following scores: Hononegah 2-0, Jefferson 9-0, Auburn 4-0, Boylan 9-0, Harlem 3-0, Belvidere North and Belvidere both 9-0, and games against Freeport and East going into penalties, still being undefeated.
“I’m so proud of what the soccer team has accomplished so far,” said varsity coach Mr. Luke Anderson. “Varsity has yet to lose a conference game this season. This could not be accomplished without their hard work and dedication to the sport and to each other.”
A special honor this season was senior Johnny Sarmiento being chosen as Athlete of the Week by WREX-TV.
¨It is a very optimistic environment,” said frosh coach Teodora Lajonica. “They support each other and make everyone feel included, including me! The complements and cheering are never ending.̈
Practice being one of the keys to become better at their plating skills. After all those hard practices on the Guilford soccer field, it was worth it. Making practice even more better when coaches become involved.
¨I love soccer and enjoy jumping in with the guys during practice,” said Coach Anderson. “Coaching allows me to stay connected to this great sport.”